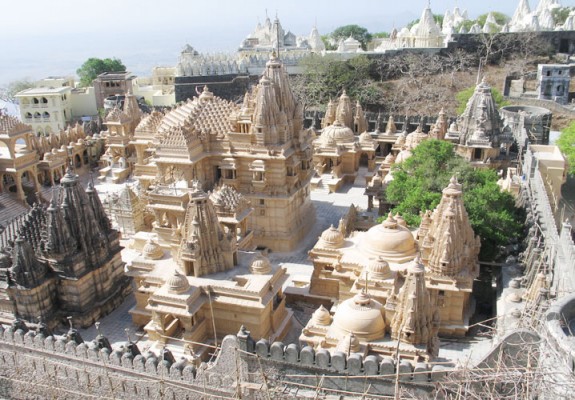 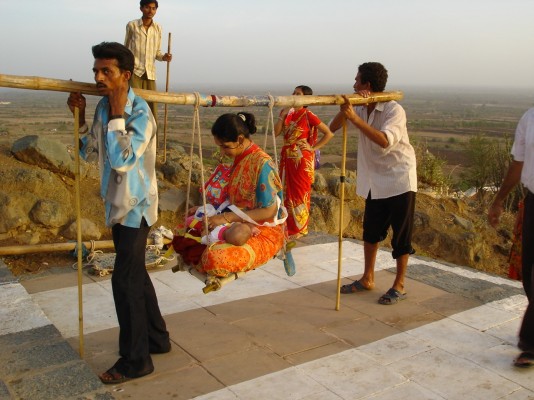 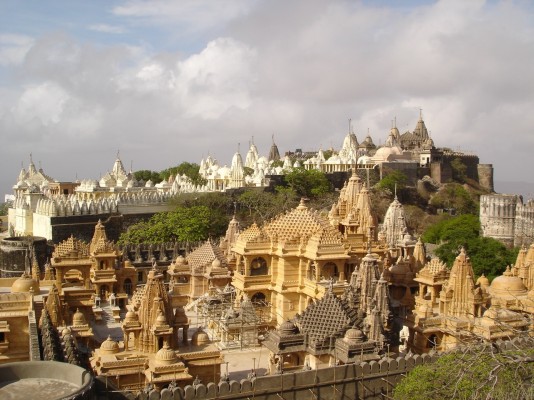 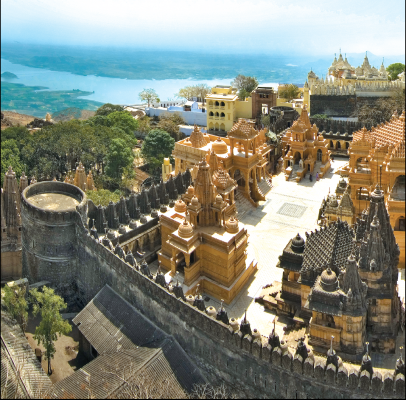 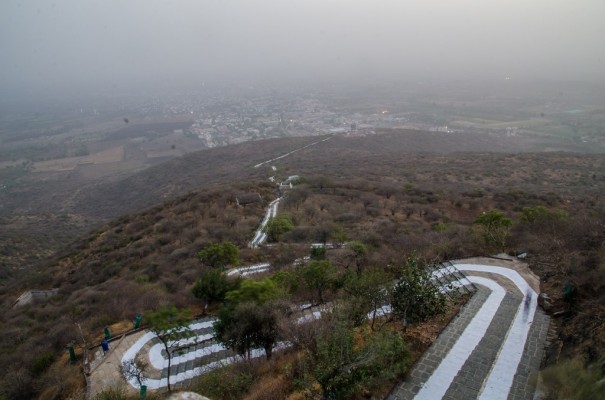 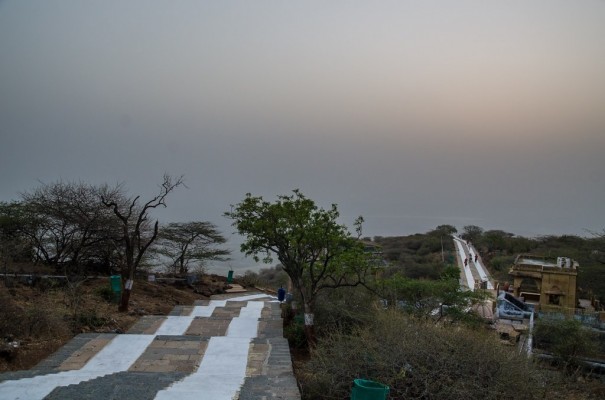 Every religion has its focal points on the surface of the earth.  In the case of Jainism, the holiest places lie not on the surface, but reaching up into the skies. Along with Mts. Abu, Girnar and Chandragiri, Shatrunjaya is one of the most sacred places for the faith. Climbing the stairs of Shatrunjaya is, for a pilgrim, the ascent to greater knowledge along the path to liberation. For a visitor, it can be a day's journey into the heart of the Jain spirituality, a passage through a new cosmology of total non-violence and devotion.

The climb up Shatrunjaya is no doubt the primary activity of a Palitana visit, for Jains and non-Jains alike. The hill is 3 kms from Palitana proper, and the 600 m climb over 3000 stairs to the top of the mountain is an unforgettable experience. Beginning at dawn is recommended, to avoid the mid-day heat. Frequent rest stops to visit temples along the way also help avoid overheating. Many devotees even gather at the highest temples before sunrise, having climbed in the predawn twilight. Be sure to carry enough water and leave a few hours to explore the mountain. Idols are bathed around 9:30am, and pujas tend to be performed around noon. If climbing in the afternoon, be sure to descend with enough time to arrive at the bottom before dark.

The construction of temples of Palitana spanned over a period of 900 years and was structured in two phases. From the 11th to 12th centuries AD as a part of the resurgence of temple building all over India, the first phase of temple architecture was constructed. The second phase followed later, from the 16th century AD onwards. Muslim invaders destroyed some of the earliest temples built in the 11th century AD during the 14th and 15th centuries AD. No one person can be attributed for the construction of these magnificent temples rather it was the effort of the wealthy businessmen who were followers of Jainism.

Several customs must be observed, as the entire hill is sacred to Jains, not only the temples. In keeping with the strict non-violence of Jainism, no leather products (wallets, belts, etc.) should be carried on the mountain. Dress appropriately; shorts and sleeveless shirts are considered disrespectful. Women should avoid tight-fitting clothing. When entering temples, remove your shoes and leave any food outside. Inside the shrines, you should not talk, laugh or smoke. Permission must be obtained from temple attendants for photography. There is no entry fee for any part of the mountain. No one, not even the priests, may remain on the mountain at night, as it is an abode of the gods and they are not to be disturbed.

The Palitana temples and whole mountain are considered the most sacred pilgrimage place (tirtha) by the Jain community, and is the world’s largest Temple Complex. There are more than 3000 temples located on the Shatrunjaya hills, exquisitely carved in marble. The main temple on top of the hill is dedicated to 1st tirthankar lord Adinath (Rishabdeva). On the top the Shatrunjai Hill is a cluster of Jain temples, built by generations of Jains over a period of 900 years, from the 11th century onwards. From the foot of the hill to the top there are 3,800 and odd stone steps cut to facilitate climbing.

Located in the Bhavnagar district of Gujarat, the stunningly beautiful Temples of Palitana are an important pilgrimage for the Jains. The temples, or derasars as they are called by Jains, can be accessed after a tiring hike on the Shatrunjay Hills and are a must visit for anyone who loves architecture and culture. These temples are actually a cluster of about 863 temples and they belong to both sects of Jainism - Digambar and Shwetambar.

According to Jain scripture, Shatrunjaya hill was the site where Adinath, the 1st Jain tirthankar, achieved enlightenment. The hill thus became one of the holiest sites of Jainism. It is no coincidence that the most sacred sites of Jainism are all mountains, where pilgrims ascend to the heavens, seeking their path to enlightenment.

Some accounts say there are nearly 900 temples on Shatrunjaya, some a great deal less. The date of the first temples’ construction is uncertain, but appears to be around the 11th century. Over the next several centuries, many more temples were built. Some temples were torn down, ravaged by thieves or non-Jains, and the temple complex has seen successive renovations over the last half-milennium. Most of the temples standing today date from the 16th century onward. Under Mughal rule, Emperor Akbar issued an edict granting special status to Shatrunjaya, as well as to Mts. Abu, Girnar and Chandragiri (in the Himalaya), protecting the area from non-Jain influence, prohibiting the killing of animals at the site, and thus allowing Jain tradition to flourish uninhibited.

At the foot of Shatrunjaya, the town of Palitana was the capital of a small princely state, founded by a Gohel Rajput named Shahji. Though clearly most famous for the nearby temple complexes, Palitana is also known for excellent horse breeding, and local industries of diamond cutting, production of harmonium reeds and weighing scales.

Guest information = Suggest to leave 5 am on the 1st day inorder to start climping and return back before lunch time.     We don;t recommand afternoon time for the visit for our guest.  Palki/Lift chairs are available at an extra cost.