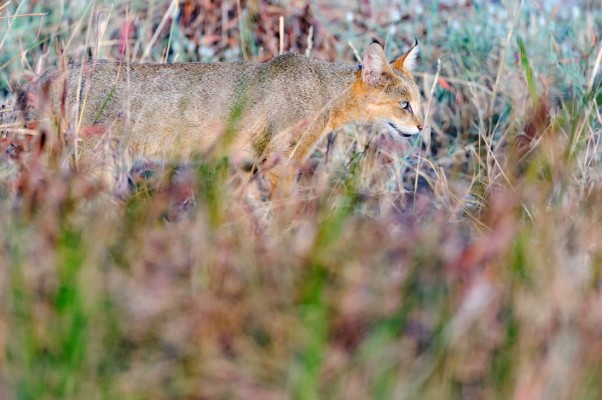 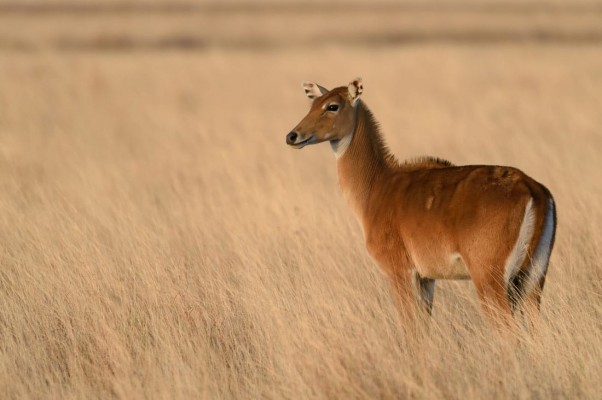 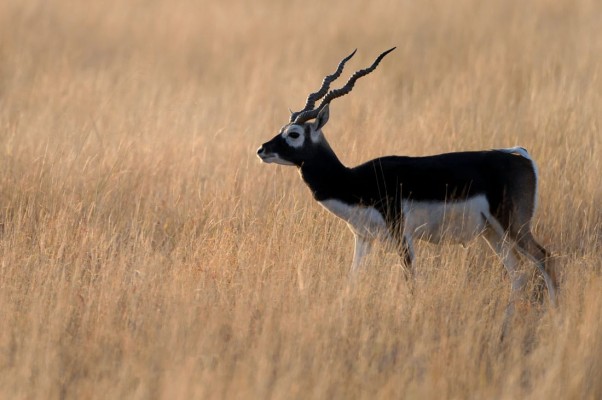 Velavadar National Park was formerly the private grassland of the Maharaja of Bhavnagar, where he would hunt blackbucks with his famous hunting cheetahs. Today, the blackbuck is considerably more endangered, and so is protected from hunting, but this sanctuary is just a tiny patch of safe ground for the blackbuck to inhabit. Created in 1976, and nearly doubled in size in 1980, the park now covers 34 square km, which is barely one-sixth the size of the city of Ahmedabad. Of this area, already small, only a little over half (17.5 square km) is usable grassland. An additional 5 square km are covered by the invasive prosopis shrub, and just over 10 square km is made up of saline lands and high tidal mudflats. These mudflats are the high tide zone of the Gulf of Khambhat, and the lower part of the park (not just the tidal area) also floods every so often. The picturesque golden fields turn a deep shade of green during the monsoon. Floods are not uncommon (and not problematic, as they are a natural part of the ecosystem’s cycle). Droughts, however, are also quite common, but pose more of a problem; park caretakers often have to resupply waterholes by bringing in tankers of water from elsewhere. Cyclones have also battered the park on occasion, the worst being in 1982 when 311 blackbucks were killed in the storm.

The blackbuck for which the park was created lives mostly in the grasslands on the northern side. Found only in South Asia, the blackbuck once lived all across India, but now the largest population is here, and few are found outside Gujarat. The conservation of the blackbuck here has been a big success, however, it remains endangered due to its dependence on such a limited area to live in, but the local population has risen from a low of 200 in 1966 to around 3400 now. Given such a large population in such a small area, the chances of spotting one are very high, especially since the wide open grasslands make it easy to spot these animals leaping high over the grasses. The breeding seasons are October and February.

Other animals in the sanctuary include the nilgai (another Indian antelope), jackal, wolf, jungle cat, and fox, but the other main attraction is the bird life. Pelicans, flamingos, white and painted storks, three kinds of cranes, many birds of prey, and the rare Stolizca’s Bushchat all live here, mostly in the southern part of the park, where all the wetlands lie. The extremely rare Lesser Florican, one of the 50 rarest birds in the world, breeds here. If you’re lucky, you might see one of its characteristic courtship displays, in which a male will jump upwards out of the grass to impress females. In the winter, thousands of harriers arrive from central Europe to spend the cooler months here; you can see them in the evenings coming back from feeding around the neighboring cotton fields. One in particular, the Montagu’s Harrier, is a major predator of the locust, a great problem for farms all around the area; as a safe haven for the pest-controlling harriers, the park serves an important role in local agriculture .

** Jeep Safari, Guide, Tours - Please contact your travel agents.   Below are the entrance fees which are on actual and payable at the time of visit.