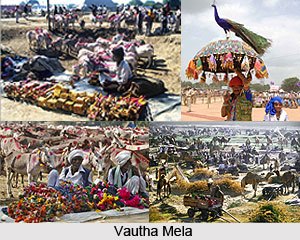 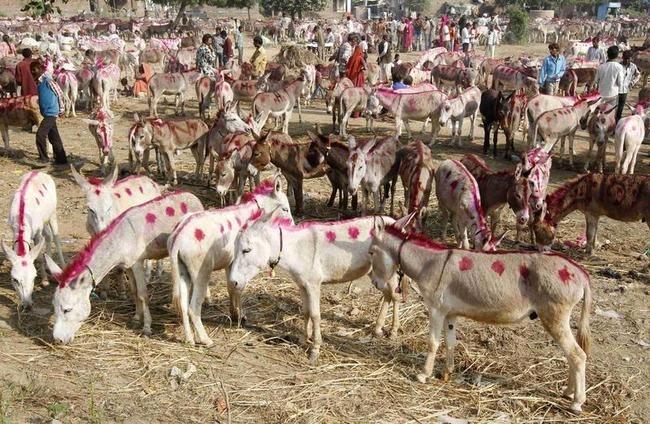 This fair is held during Kartika Purnima, the full moon night of the month of Kartik in the Hindu calendar, corresponding roughly to the month of November. It lasts for five days.The magnificent Vautha Fair is held every year at Vautha, where two rivers, the Sabarmati and the Vatrak meet.

Tens of thousands of donkeys, as well as hundreds of camels, adorned in an array of colors and bright embellishments are brought here for the largest animal fair in Gujarat, where they are traded on the fair grounds at the sangam tirtha. People generally arrive here on tractors, buses, chhakdas, camels, jeeps and other variedmeans of transport. For some this place is as divine as the sangam in Allahbad, and many communities even consider this fair more important than Diwali. Seven holy rivers mix waters here: the Vatrak merges with the Meshwo, Hathmati, Shedhi, Majum and Khari before it then meets the Sabarmati, so the locals call itsaptasangam (meeting of seven).

For many years, the tradition has been to camp at the fairgrounds in tents- about 25,000 people stay in 2000 tents on the river bank, spread across three square miles of fairgrounds. Hundreds of families from even nearby villages lock up their homes and move into tents to enjoy the fair for five days.  They cook different sweets for each day, often ending with laddoos on the last day of festivity. However, the favorite foods here are the khichu and kachariyu.

As a trading fair, the site is a bustling scene, with a variety of handicraft and food stalls, and active street hawkers and merchants selling everything from trinkets to machinery. In the evenings, numerous small lamps are set afloat in the river by devout pilgrims, producing a shimmering dance of faith and beauty.

Legends hold that on a full moon night Kartikeya, the son of Shiva, visited this site on Kartika Purnima during his journey round the earth, and performed austerities at the meeting point of the rivers. His paglas are still worshipped here. Dholka is also believed to be ‘Virata Nagar’ of the Mahabharata where the Pandavas spent the last year of their exile in disguise.