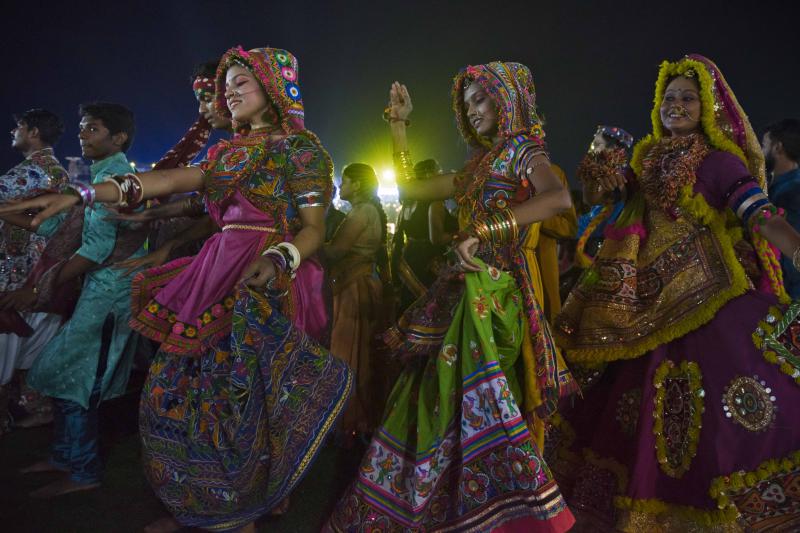 Navratri is celebrated for nine nights, beginning on the first day of the bright fortnight of the Hindu month A shwin, roughly correspondi ng to dates in the Grego rian calendar in September /October. This also usually coincides with the end of the rainy season. Dasara/Vijayadashami, is the tenth day of Ashwin.

Navratri, meaning 'nine nights', is one of the most popular and widely celebrated Hindu festivals in many parts of India. Gujarat, however, is the only state that erupts into a nine-night dance festival, perhaps the longest in the world. Each night, all over the state, villages and cities alike, people gather in open spaces to celebrate feminine divinity, referred to as Shakti.

The dance form known as ras garba (also joined sometimes by dandiya, which uses small wooden sticks), comes from Lord Krishna's worship rather than Goddess worship, from the Gop culture of Saurashtra and Kutch. Stories of relationships between Krishna and the Gopis, and their emotions, also often make their way into the ras garba music.

At night the village or urban neighborhood gathers to perform a puja to one of the nine forms of Goddess. The nine nights are also broken up into sections of three; the first is for Durga, the goddess who destroyed an evil force represented by the demon Mahishasura, and who destroys human impurities; the second is for Lakshmi, the goddess of prosperity; the third is for Saraswati, the goddess of wisdom and art. It is a time to celebrate fertility and the monsoon harvest, represented by a mound of fresh soil in which grains are sown.

The tenth day, Dashera, also known as Vijayadashami in South India, is celebrated by doing a puja to bless one's vehicle, and is also the day to buy new vehicles, if necessary. It 's also celebrated, probably after getting up far later than usual, by unabashedly eating lots of fafda, a salty fried crunchy snack and jalebi, a sweet fried sticky snack.