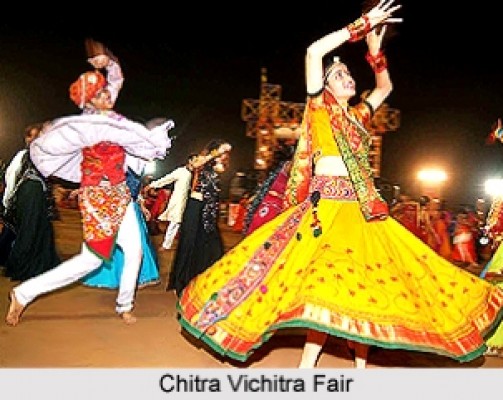 The small 15th century Poshina Fort stands on the Arravalli hills, at the confluence of two holy rivers, with views over the hills. There are ancient Jain and Siva temples nearby as well as tribal villages, where you can watch arrow making, basketwork, silversmiths and potters. The area is home to Bhils, who follow traditions, said to date from 2000 BC, colorful Garasias in their artistic jewellery and Rabaris who herd camels, cattle and goats. Chitra Vichitra Fair is held a fortnight after Holi, at Gunbakhari nearby, when mourning for the dead, is combined with festive tribal dancing and concludes with elopements.

About 18 kms from Ambaji in Sabarkantha district, Poshina takes one back to the simple beauty of traditional village life, populated by a captivating mélange of colorful tribal communities of the Garasias, Bhils and the pastoral Rabaris. Poshina is home to a tribal shrine where you find the staggering scene of thousands of terracotta horses standing in rows as offerings to the local goddess. Nearby villages have similar horses carved in reverence to her divinity. A visit to the homes of the potters who make these striking horses is an excellent glimpse into tribal culture.

In Poshina you find the Darbargadh Poshina, once a palace, and now a welcoming heritage hotel, with huge gateways, a massive dome, numerous pillars and arches, a pleasant courtyard, gardens, lawns and terraces, owned by the descendants of the Chalukyas, whose empire spread through much of Gujarat and Central India in the 12th century. You also find old Jain sandstone temples of Parshvanath and Neminath and an old Shiva temple.

Poshina is host to the famous Chitra-Vichitra fair, at the nearby Gunbhakhari village, a couple of weeks after Holi.

Near by Sightseeing Details

Ambaji is a statistics town in Banaskantha area in the province of Gujarat, India. It is known for its authentic and fanciful associations with locales of social legacy. Ambaji is a town inside taluka area Banaskantha, North Gujarat, India. It is situated at 24.33°N 72.85°E. It is at an elevation of 480 meters (1,570 ft). It is encompassed by the Araveli Hill extend . Ambaji is inside the Aravali Range truly signifying ‘line of pinnacles’, is a scope of mountains in western India running roughly 800 km a northeastern way crosswise over Indian conditions of Gujarat, Rajasthan, Haryana and Delhi. It is likewise called Mewat slopes locally. Ambaji town additionally in the middle of the outskirts of North Gujarat and Abu Road of Rajasthan.

Gabbar Hill is arranged in region of the River Saraswati, situated at the outskirt of Gujarat and Rajasthan. The slope is situated at a height of 400 m over the ocean level and is spread over a region of eight sq. km. Arranged at a stature of 480 m; the noticeable fascination on this slope is the sanctuary under the heavenly pipal tree.

Ambaji Temple is situated on the Arasur slope of the Aravalli extend in Ambaji. The sanctuary is among the 51 Shaktipeeths and it is trusted that the core of the Goddess fell at this place. Locals likewise trust that the tonsorial service of Lord Krishna occurred at this site. Another prevalent view of the site is that the Goddess herself, helped in the marriage of Rukmini and Krishna.

Shri Koteshwar Mahadev Temple is arranged 8 km from Ambaji close Saraswati River. The sanctuary is situated between the leave zone of Kutch and the huge ocean region. This sanctuary alongside the Valmiki Mahadev Mandir was worked by the Maharana Pratap.

Kumbhariya Jain Temples are a gathering of Jain sanctuaries, developed around 900 years prior. The sanctuaries are arranged at a separation of 2.2 km from Ambaji in the area of Banaskantha, Gujarat. The gathering of sanctuaries is dedicated to the five Jain Tirthankaras to be specific, Mahavira, Parshvanath, Neminath, Shantinath and Sambhavanath.