Once the residence of the younger brother of the Maharajah of Rajpipla this grand piece of Indo-European architecture is set in 4 acres of land. From the palace terrace, you can see hills, ravines and lush greenery. The interiors are delightful with wall paintings, canvas paintings, Italian marble floors, antique furniture, a grand banquet hall, lavishly appointed sitting rooms and 4 guest suites.

It is located on the banks of River Narmada and is a major sea port. Due to this reason, a number of trade activities have flourished here. Travel and tourism is slowly flourishing in the city. Bharuch is addressed by several names due to the trade between East and West countries, which comprised mainly of silk and spices. There are a plenty of agricultural and industrial activities flourishing in the city. Nearby village people throng the city for shopping. There are a number of chemical plants here, producing fertilizers, paints, dyes, cotton, textiles and dairy products.

For the shop aholics, there are a number of shopping malls and complexes where you can shop till you drop. The markets of Bharuch are also good places to get things at reasonable prices. The salty Peanuts of Bharuch are world famous, so don’t forget to buy some.

Bharuch in Gujarat is an ancient town with a 2000 year history located at the mouth of River Narmada. Tour to Bharuch will educate you about the ancient background of the historical city. It is acclaimed to be the oldest seaports which prospered in the 1st century AD. As per the history, Bharuch came under the rule of the Solanki rajputs much later. The city got its name ‘Bhrigukachba’ from the Temple of Bhrigu Rishi, the name later shortened to Bharuch. Today the city is well known for its textile mills and long staple cotton. Bharuch tour is educational, informative and very inspiring.

Traveling to Bharuch will give you an opportunity to explore this very old town with historical records and significances dating back to 2000 years ago. In the 17th century, English and Dutch factories were established here.

Bharuch tour will make you explore the various attractions of the town. It boasts of a fort which overlooks the wide Narbada (or Narmada) River from its hilltop location and, at its base, is the Jami Masjid, inspired by a Jain temple. On the riverbank, outside the city to the east, is the Temple of Bhrigu Rishi, from which the city got its name. The town was known as Bhrigukachba later abridged to Bharuch.

Tour to Bharuch will educate you about the rich historical heritage. From the blessed river of Narmada to the Golden Bridge, the district has a wide choice of tourist attractions. All the tourists’ places are well preserved by the Gujarat Government. Major tourist attractions include Bharuch Fort and the temple of Bhrigu Rishi as stated above. A gigantic banyan tree which covers a hectare, located in the close by island of Kabirwad, in the Narmada River, is another spot which will surely catch your fancy. As one of the most industrialized districts of Gujarat, Bharuch is swiftly advancing towards a prosperous phase of development. Tour to Bharuch is frequently organized by industrialists and businessmen. Distinguished industries, chemical plants produce dyes, fertilizers, dairy products and paints. Liquid Cargo Terminal is another industrial attraction of this place. Bharuch also houses many reputed multinationals which form a substantial part of its yearly revenue. Known as one of the most ancient places of Indian history, tour to Bharuch is enriching and invigorating.

The Lallubhai Haveli in Bharuch is a much treasured tourist attraction of the city. Tourists do not forget to visit this beautiful fort on their tour of Bharuch. The fort of Lallubhai Haveli is perched on a hilltop. Below the hill, the Narmada River flows. The famous Jama Masjid is located at the base of the hill where the Haveli is located. Upstream of Bharuch, the Sardar Sarovar Dam can be spotted.

Lallubhai Haveli, Bharuch was erected in 1791 A.D. by Lallubhai, an ex-diwan of the last Nawab of Bharuch. The Haveli is a one-storeyed building. It has one room on the second floor. Lallubhai used to hold up meetings in the court here. The Haveli showcases beautiful architecture of richly designed carved wood. On the second floor of the building you can spot arrangements for placing matchlock guns. Lallubhai Haveli also has underground passages.

Bhrigu Rishi Temple is one of the popular temples in the whole of Gujarat. It exists on the holy banks of the River Narmada and is located towards the east of Bharuch. Pilgrims from not just various parts of India but also from several countries of the world visit the temple every year. The temple walls were constructed during the period between 1675 AD and 1686 AD by the Marathas. Bharuch, which was actually called Bhrigukachchha got its name from this temple.

Dashashwamedh Ghat is located on the banks of River Narmada. The site is of immense historical importance. People hold the ghat in high esteem because of the legend associated with it. The entire region wears a festive look during poornima days. It’s believed that this is exactly same place where Lord Vishnu reincarnated himself as Vamana, a dwarf Brahmin, and had measured the entire universe in just three steps.

Roman Catholic Church in Bharuch is one of the most popular sacred shrines existing in Bharuch City of Gujarat. Its origin is dated to as far as 200 years back. The revamping process of the church took place in the year 1861 AD.

Valanda Kothi was once a Dutch factory, which functioned to its fullest before the British rule began. It was converted into a union high school to serve the educational purposes of the local children in Bharuch. The attraction is currently under dilapidated condition because of lack of maintenance from the civic authorities.

Madresa Mosque was built by the famous Muslim ruler Mohammad in 1038 AD. It comes as a huge surprise to know that the mosque is one of the oldest Mosques Of Gujarat. Persian scriptures available on the wooden plates provide a wealth of information of the days gone by and attract the attention of every visitor. Also, the pillars of the mosque and the entrance door are constructed using black wood. There are other attractive engravings as well that date back to as far as 200 to 300 years old.

Adjoining the mosque is a shrine of the famous saint, Maulana Ishaqu, who was a great scholar, who died here in 1660 AD. 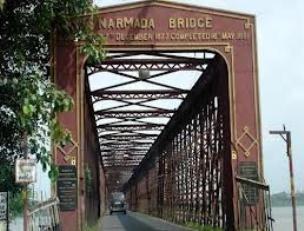 Ankleshwar,(sometimes written Ankleshvar) is a city and a municipality in the Bharuch district of the state of Gujarat, India. The city is located approximately ten kilometres from Bharuch. Ankleshwar is known for its industrial township called GIDC (Gujarat Industrial Development Corporation), which is one of the biggest in Asia. Ankleshwar also has an office of the ONGC (Oil and Natural Gas Corporation Limited). Today, Ankleshwar has over 5000 big and small chemical plants. These chemical plants produce products such as pesticides, pharmaceuticals, specialty chemicals, and paint.

Birds having affinities with Himalayan and Western Ghats, a variety of raptors, the hills of Satpuda range, the thrill of coming across a python or flying squirrel, pangolin or big/ lesser cats and the scenic beauty of moist deciduous forest… all this can be enjoyed by an eco-tourist at Shoolpaneshwar Wildlife Sanctuary. The Sanctuary encompasses an area of 607.71 sq. km in Narmada district, which comprises a major watershed, feeding the Sardar Sarovar and the Karjan reservoirs. Hilly tract of the Sanctuary bordering Narmada supports some of the best forests in Gujarat. The physical aspect is dominated by the Rajpipla hills. DhamanMal, the highest peak located in the eastern portion, is about 882 m in altitude. The general slope of the area is towards the west. The forests are some of the best and the densest in the State and are known for richness of biodiversity. The sightings of various bird species, which have more affinities with Himalayan and Western Ghat, have unfolded a hitherto unknown, but interesting aspect of the area. Moist deciduous forests have very high scenic and aesthetic values. The flora of the ecosystem represents remnants of semi-evergreen to moist deciduous forest. Much of the vegetation is modified due to influence of the biotic pressure and forestry operations.

Bharuch Fort is the principal attraction of the City Of Bharuch. It was constructed in 1791 AD by Siddhraj Jaysinh, one of the famous rulers belonging to the Solanki dynasty. One can have an aerial view of the beautiful River Narmada after climbing the fort. The construction style of the fort is very unique as some of the spectacular wooden carvings here leave the visitors spellbound.

The Golden Bridge that connects Ankleshwar to Bharuch was built in 1881 by the British, who needed a bridge across the Narmada River to create better access to trade and administration officials in Bombay. According to legend, it is known as the “Golden” bridge because the iron used in its construction is very sturdy, resistant to rust and rare, hence it should be much more expensive than modern steel.